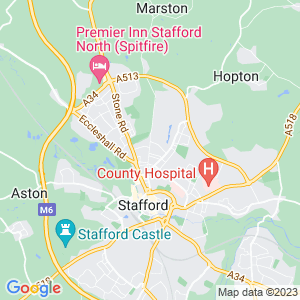 The first reference to a football club in Stafford came via an enquiry to the Staffordshire Advertiser, in September 1876. The reply, published the following week, suggested that the club was already up and running but no firm facts are known. Much of the early history is recorded in a book, ‘The Cinderella Story’ written by former Chairman Paul Butters (1972). Whatever the date of formation, the name of Stafford Rangers soon became established on the local football scene. Playing mainly friendlies and cup games, Rangers reached the 1st Round of the FA Cup in 1884-85 and again the following season but they found success limited in those early years.

They moved to their present Marston Road venue in 1896, changing at the nearby Albion Pub, the ground became known as the Albion Ground. Bizarrely, Rangers fielded two sides in two separate leagues in 1900-01 after they joined the Birmingham League and their resignation from the North Staffs and District League was rejected. In 1904-05, Rangers enjoyed a memorable run in the FA Cup, reaching the Sixth Qualifying Round before losing out to 2nd Division Blackpool in a replay.

The club won its first league title, the Birmingham Combination in 1912-13, and were runners up on a couple of occasions but their first ‘Golden Era’ came in late 1920’s as they won the Birmingham League (1926-27), came runners up twice (1928-29 & 1929-30) and third twice. During this five year period, 542 league goals were scored with Eddie Cameron scoring more than 150 of them. But the good times came to an abrupt end. The 1930’s proved a constant battle for survival both on and off the pitch. Player shortage forced Secretary RP Brown to play in one match (scoring the goal that earned their first away point of the season at the 14th attempt) and, in April 1935, only a successful appeal to pay creditors enabled them to continue.

After a break for the Second World War, Rangers resumed action in 1946-47 playing in the Birmingham Combination. A controversial move was made to the Cheshire League in 1952-53 but, apart from a Cheshire League Cup final appearance in 1954, the struggles continued. One other highlight came in 1958 when Rangers set a club record 11-0 victory over Dudley Town in the FA Cup. Les Box set an individual scoring record with 7 goals.

The 1960’s were also a time of struggle and once more the future of the club was in doubt. Only the generosity of Chairman Eric Morgan ensured their future as crowds dropped to around 200. The appointment of Colin Hutchinson as manager in 1966 marked an upturn in the club’s fortunes, winning the Cheshire League Cup in 1968 and promotion to the Northern Premier League a year later.

The 1970’s brought in the second Golden Era. Manager Roy Chapman led the club to a historic treble of NPL title, FA Trophy (3-0 v Barnet) and the Staffs Senior Cup while Ray Williams broke Eddie Cameron’s goalscoring record with 48 goals. In 1974-75 Rangers defeated Stockport, Halifax and Rotherham on their way to the 4th round of the FA Cup before going out to Peterborough in front of 31,160 at Stoke’s Victoria Ground. The third round tie v Rotherham had attracted a record Marston Road gate of 8,536. The Centenary was celebrated the following season but it was a year of near misses as Rangers were runners up in the NPL, the FA Trophy and the Staffs Senior Cup. The club also experienced European football, playing against Monza & Udinese in the Anglo Italian Tournament. In 1979, Rangers won the FA Trophy for the second time beating Kettering 2-0, the match setting a record gate for the final (32,000).

Rangers struggled in the newly formed Alliance Premier League and were relegated back to the NPL in 1983. Manager Ron Reid led the club to a record 20 games unbeaten and the NPL title in 1985 and won the Bob Lord Trophy the following season. Rangers achieved their best ever Conference finish (6th) in 1988 but life was largely a fight against relegation, despite the likes of future internationals Stan Collymore (England) and Paul Devlin (Scotland) making their names at Rangers. Dennis Booth matched the sixth place finish in 1993 and took the club to the 2nd Round of the FA Cup with victory over Lincoln City.

Relegated from the Conference in 1995, a second consecutive relegation followed as Rangers never recovered after picking up just two points from their opening 19 games in the Southern Premier League. Rangers bounced back in 1999-2000 as Ian Painter led the club to the Dr Marten’s League Western Division title, setting a new club record of 23 unbeaten league games in the process. Another club record was broken as Kidsgrove Athletic were beaten 15-0 in the Staffs Senior Cup in 2001-02.

Phil Robinson replaced Painter and the club finished Southern Premier runners up in his first year (2002-03) as well as winning the Staffs Senior Cup and taking the club to the 1st Round of the FA Cup for the first time in a decade. The following season, Rangers finished third and qualified for the newly formed Conference North. After topping the table for much of the 2005-06 season, Rangers eventually finished runners up but won promotion back to the non league top flight thanks to a play-off victory over Droylsden. Rangers’ stay in the Conference Premier lasted two seasons before they were relegated back to Conference North, but the cost of Premier football lingered and the future of the club was in doubt once more.

The appointment of big name managers such as Steve Bull, Tim Flowers and Matt Elliott failed and Rangers dropped to the third tier of the pyramid, returning to the NPL for 2011-12. Two more disappointing years followed under the leadership of Greg Clowes. Another big name appointment, Andy Mutch, also failed and his replacement, Graham Heathcote, couldn’t save the club from relegation. Neil Kitching arrived during the summer of 2014 but the club was rocked on the eve of the new season by the sudden death of secretary and director Mike Hughes who had helped carry the club through the rocky times. But everyone responded positively. In his first season in charge, Kitch lifted the Staffs Senior Cup and in the following season he guided Rangers to the Division One South title.

The 2016-17 campaign failed to produce any silverware as Rangers lost in the final of the Walsall Senior Cup. In the league, Rangers fell just short of making a push for the play-offs but will be hoping to be among the challengers in the forthcoming campaign.